With that being said, the journey to finding what suited me best was a rough one. Not only was I trying to figure out how to apply makeup properly, but the makeup industry wasn’t really cooperating with the whole super pale thing when it came to color selection – or it just wasn’t nearly as accessible. I would get discouraged because I would see brands launch a shade expansion to only discover that their idea of “porcelain”, “ivory”, or my favorite, “alabaster” still wasn’t even close to what I needed in order to avoid my high school look.

About a year after I graduated from college, I decided to consult other sources – can’t the internet be great? I thought it was worth searching around to see if other people had discovered some mystery product that I just hadn’t seen – after all, I tend to not see a lot of things. After a lot of trial and error, I am happy to report that I found two foundations that I believe are very good matches for me! I believe that one of these products has been around for a while, but was only accessible online (which I just never considered to be a thing – I thought what I saw in store were my only options. Mind blown). The other foundation I found has also been on the scene for a little bit, but with a recent shade expansion, what my pale self needed was finally covered – so to speak.

Now, this isn’t to say that these foundations will work for you (whether it be the shade itself, undertone, or formula preference), but whether you have albinism or are anywhere close in the fair ballpark, I would at least recommend looking at these brands! If they don’t work for you, check shade ranges online in other brands, read reviews, and try a bunch of different products! Trust me when I say it’s a pain. I certainly wouldn’t put it on my top tem favorite experiences list. However, I will say that I’m glad I did it. I’m glad I didn’t just settle at as close as I can get. Because although I was happy to be wearing makeup, I was always self-conscious because I knew it didn’t look right. At that time, I was more self-conscious about what I was trying to cover with makeup and I convinced myself that my face not matching my body was a better look than me just without makeup. The mind is a powerful thing, y’all. All of that to say, if you haven’t found a foundation that works for you, and it is something that matters to you, don’t give up on the hunt!

This was the first foundation that I found and was SO excited! For the first time in my life, while wearing makeup, my face resembled the rest of my body! That sounds dramatic, but if you have, too, embarked on this crazy journey, you get me. This is the product that I think has actually been out for a while. The sneaky part is that it was only available online – I like to think of it as an exclusive club, not so much that there aren’t enough extra pale people to actually stock this shade in stores. And again, I just never thought to look online because I assumed that what I saw in stores was what the brand had to offer. Wrong again, Ashley.

This foundation is my favorite for day-to-day. It’s a lighter coverage and tends to last on me all day.

Once I discovered the MUFE foundation, nothing could compete. I tried a few others just to see, but nothing came close to what I liked about the MUFE one – until I stumbled upon this. I wasn’t trying to replace the Y205, but rather have another option if I wanted it. The Born This Way foundation was the ticket!

This is definitely a fuller coverage product. I use it on the days when I’m needling a little extra help. I have been so happy with the color, how it wears, and the coverage it provides!

I apply both foundations with a BeautyBlender like this one. At first, I was super AGAINST this overpriced sponge – even if it’s pretty and pink. I thought it was a gimmick and one of those things that the beauty industry convinced you that you needed, when in actuality, you don’t. Long story short, I got caught up in a sale and decided to see what the hype was about. And y’all, I hate to say it, but it’s really good. I honestly think that my makeup looks more smooth, and well, blended. Maybe it’s in my head and I just fell for the trap, but I like it. I even tried another, more reasonably priced brand thinking a sponge is a sponge, right? Apparently not so much. It really wasn’t terrible, but I am happier with the BeautyBlender results and I find myself repurchasing them (but only when they’re on sale because it’s still stupid to pay that much for a sponge).

What are your favorite foundations? I think I’ve moved up the ladder from “makeup idiot” to “makeup dumb-ish” because I’m sure there is still SO much to learn. I’d love to know what is working for you! 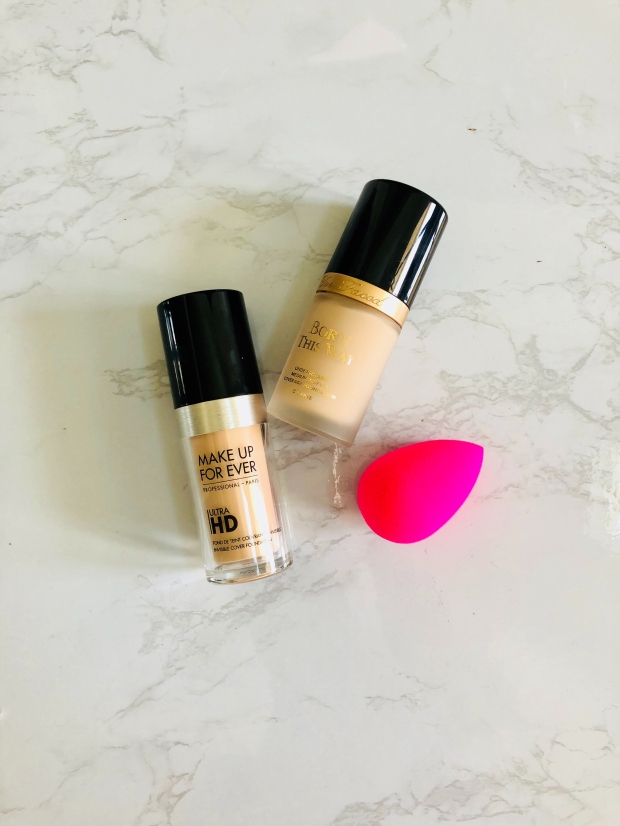